The Hudson River Tugboat accident is now a Case

The Hudson River Tugboat accident is now a Case 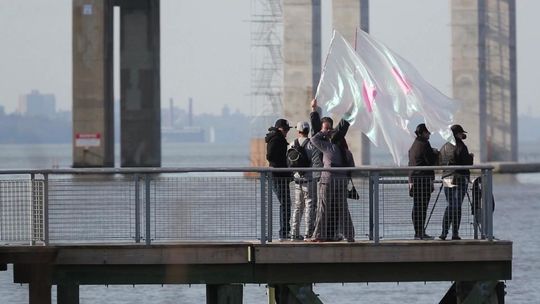 On March 12th a 90-foot tugboat named the “Specialist” was support in steering a barge south along the Hudson, about 25 miles north of NYC, when it collided with a construction barge at 5:15 a.m. near the site where the new Tappan Zee Bridge is being built.

Authorities report that 3 tugboats were transporting a barge from Albany, New York to Jersey City, New Jersey, when one of the three – positioned on the right side as it headed south – crashed into a stationary barge that was part of the new Tappan Zee Bridge construction site.

Why Did This Tugboat Accident Happen?

Apparently, the tugboat had strayed too far from the middle of the channel and was unable to correct its course in time to avoid the construction barge. A tugboat on the left side of the barge, in addition to one that was pushing the barge crane from the stern, were not involved in the accident. The bodies of Timothy Conklin, of Westbury, New Jersey; and Paul Amon, of Bayville, New Jersey, have already recovered.

The body of Harry Hernandez, of Staten Island, (who is now being represented by the Jones Act law firm of The Law Offices of Michael S. Lamonsoff) was in the heavily entangled area in the front of the recessed tugboat and was not able to be removed until a special crane brought up from Virginia was available to raise the 90-foot vessel.

Coast Guard officer Sabrina Laberdesque said in local reports that the search area was “heavily saturated” by multiple agencies trying to figure out exactly what went wrong and caused the tragic tugboat accident. The tugboat also oozed at least 5,000 gallons of diesel fuel, creating an oil slick about 100 yards wide and 5 miles long, according to reports. Governor Andrew Cuomo called the crash a “tragic accident.”

“We offer our thoughts and prayers to loved ones of the crew members aboard the tugboat,” he said in a statement to the press. “The state is actively working with our partners in law enforcement in locating the missing crew members and minimizing environmental damage along the Hudson River.”

Earlier in March, the Coast Guard delivered a warning for mariners in the area of the new Tappan Zee Bridge construction site, saying that “over a hundred fragments of floating equipment and support vessels” will contribute in the project. The massive project also involved more than 30 equipment moorings.

Sailors were advised to use the main channel, decrease wake and use extreme caution while traversing the area in the neighborhood of the new Tappan Zee Bridge, particularly during inclement weather and darkness, and pay specific attention to vessel movements, said the safety notice issued by the Coast Guard dated March 3.

What Has Governor Cuomo Said About The Incident?

Governor Cuomo said in an interview that the tugboat “did not come down the middle of a 600-foot-wide U.S. Coast Guard-designated channel” and got too close to the construction barge. Local representatives said investigators are still conducting interviews and trying to figure out exactly what happened. A rep for the company that owns the tugboat did not instantly return a request for comment. This is not the first time a boat has hit a construction barge near the Tappan Zee Bridge with deadly results.

In 2013, a boater was charged with vehicular manslaughter and criminally negligent homicide after he drove a 19-foot Stingray powerboat into one of three construction barges that was strapped together near the bridge, tossing a bride-to-be and her fiancé’s best man into the river, according to the summons.

Two individuals were killed in the accident. The family of Harry Hernandez of Staten Island, one of three men who perished in this recent tragic tugboat accident, is seeking to file a lawsuit. Michael S. Lamonsoff, the New York personal injury power attorney, is representing the family and was quoted as saying, “the Hernandez family has suffered a tremendous loss. It is my job to help the family find some sort of peace and justice in this tragedy.”

If you or someone you know was injured or killed as a result of a boating accident, please contact one of our experienced New York accident attorneys immediately at 212-962-1020 or Toll-Free at 877-675-4529. We will provide you with an immediate and free consultation. Remember, the Law Offices of Michael S. Lamonsoff, PLLC is available for legal consultation 24 hours a day, seven days a week.